Friday Fun Facts: Off to a Saturday Conference!

"The good writing of any age has always been the product of someone's neurosis, and we'd have a mighty dull literature if all the writers that came along were a bunch of happy chuckleheads." ~William Styron

Tomorrow I'm heading to a Spring Writer's Conference at William Paterson University. Really looking forward to it, since the focus is "Writing Childhood" ~ perfect for me who's attempting her first YA novel!

Even better, I'm going with 3 of my close writing friends, and it's a wonderful conference (I've been before): breakfast, lunch, keynote speaker, and 2 workshops...all for $50! It's one of the best bargains around. I'm taking the "Panel: Publishing Adolescent Writing" and "Coming of Age Fiction" workshops.

Will be back here Monday morning with a full report!
Posted by Allie Boniface at 12:00 AM 3 comments:

Writers' Wednesday: Learning to Deal with the Hard Stuff

“I take rejection as someone blowing a bugle in my ear to wake me up and get going, rather than retreat.” ~Sylvester Stallone

For my blog tour next month, I'm going to be writing a post about 10 things I wish I'd known about being an author...or something like that. Anyway, I was thinking about it, and one thing I've learned over the last 2 weeks - and wish I'd known - is how to deal with harsh words and bad reviews.

Here's the thing: you learn to deal with rejection pretty quickly before you become a published author. Unless you're incredibly unique, you're going to get rejection letters (or emails) from agents and editors before you get that first contract. Then, once you're published, you're probably going to get reviews you won't like.

Case in point, One Night in Boston, which for the last 2 weeks has been featured as a Kindle Freebie over at Amazon. Wonderful experience, as it's been in the top 4 the entire 2 weeks - mostly in the #2 spot. And I've seen the rankings of my other books, all of them, ebook and print, improve as well. Terrific.

I've also seen the number of reviews on my book increase from 2 to 24. Great, I thought at first, reader feedback. But interestingly enough, those reviews range from the 4-and 5-star raves to the 1-star pans. Really. I stopped reading the 1-star reviews after I saw comments like "There's a reason this is free - don't waste your time" and "Not smart, not funny, not well-written." Ouch. I'm gonna be honest - it hurts. And now I know why some movie and music stars don't read their reviews. Not to say I'm anything close to a star, but I still get it. Poor reviews can really make you start second-guessing yourself.

So that's one thing I wish I knew: that people will probably dislike your work, even after you're published, after an editor has worked through it with you, after review sites have praised it and friends and unknown readers have sent you fan mail about it. I will read future reviews with more than one grain of salt, and I won't read any more scathing reviews. I know people have different tastes, and I know some people simply won't enjoy my book or my writing. But I don't have to dwell on the negative things they have to say, either, or let them bring down my self-esteem.

Soldier on, fellow writers!
Posted by Allie Boniface at 12:00 AM 8 comments:

Monday Mentionables: A YA Contest and a Bathroom Reno

"The whole difference between a construction and a creation is exactly this: that a thing constructed can be loved after it is constructed; but a thing created is loved before it exists." (G. K. Chesterton)

First to mention for today: any YA author might be interested in this contest: a FREE edit of your completed manuscript by Dear Editor. More details here - the deadline is this Wednesday, April 14th!
**************************
And second to mention is non-writing related: we've been renovating our master bathroom over the last 2 weeks, and I think the end is almost in sight! Hubby did some of the work, and friends in the construction biz helped out, and we hired people to do the tiling... and here are a couple of preliminary pictures. We're hoping to get the rest of the furniture (new vanity, medicine cabinet, fixtures, etc) this week, but so far I love it! 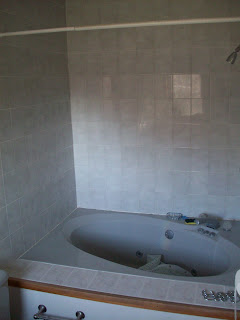 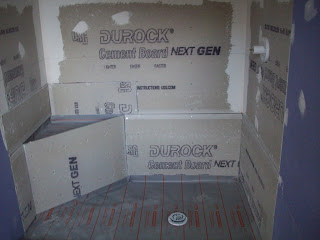 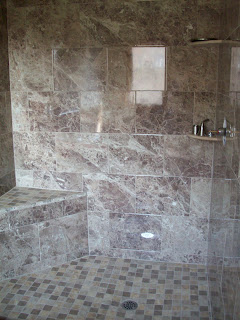