Friday Fun Facts: Why I'm in Love with Nashville

So fall television has started...with mixed reviews, I hear. CBS has already shuffled shows around (and canceled some). Hubby and I have tried a few of the new sitcoms, but I can't say I'm loving any of them.

Mom - the subject matter of a single mother who's openly cheating with her married boss (and that's just the beginning of the dysfunction), doesn't reach humor even though it tries with the daughter-sneaking-around-and-then-getting-pregnant plotline or the estranged-mother-of-central-character-reappears-in-therapy-and-tries-to-make-nice plotline.

The Crazy Ones - It certainly has promise with Robin Williams as a main character, and I'd probably watch it just to see what he does. But Sarah Michelle Gellar doesn't work for me as the put-upon working daughter trying to save her father's totally ambitious but floundering career in advertising.

The Millers - Couldn't make it past the first five minutes. The whole premise of a newly divorced middle-aged man moving in with his newly divorced parents (who apparently still live together) tries to rest on a lot of raunchy humor. But, um, no. Didn't work for me.

So what do we watch in this house? Hubby loves his reality TV, especially Duck Dynasty (it has its moments, but I have yet to watch an entire episode), Pawn Stars, and American Pickers. I will say the history of both those shows is kind of cool. We do watch Survivor religiously (we haven't missed an episode in 27 seasons), always entertained and fascinated by the personalities thrown together on the island and how they interact - or don't.

We tune into The Big Bang Theory and Two Broke Girls for laughs and Person of Interest and The Mentalist for drama/who-dun-it mysteries.

But my latest addiction is the very soapy Wednesday night drama Nashville. Anyone else watch it? Yes it's campy, yes it's far-fetched, and yes it pulls out every possible plot contrivance. But something about it has drawn me in. Perhaps it's the characters and the way they are continually tormented by the next  thing that can go wrong. (Among other things, the season 1 finale featured an alcohol-fueled car crash, a surprise pregnancy, an in-the-closet-out-of-the-closet gay character, a marriage proposal, and a mother's suicide to protect her celebrity daughter from a sex tape scandal. Told you it was soapy!) 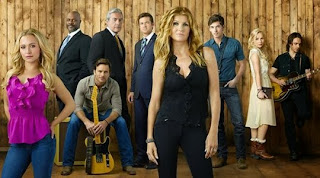 Perhaps it's the actors themselves: Hayden Panetierre, Connie Britton, and Charles Esten are simply captivating on screen (and easy on the eyes).  Perhaps it's the music, original country songs written for every episode that just ooze angst and heartache and hope. All together, there's really nothing about Nashville I don't like. And getting attached to the characters and watching the way the writers create captivating story lines has influenced my own writing as well.

So what about you? What do you watch?
Posted by Allie Boniface at 12:00 AM No comments: 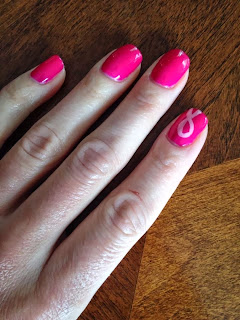 While I was getting a manicure over the weekend (in honor of Breast Cancer Awareness Month - do you like it?), the nail tech and I got to talking. She asked the inevitable question: where do you get your ideas? And I told her, as I usually do, that all I have to do is read the paper or turn on the news. Case in point, headlines from the last couple of weeks that got me thinking:

Groom Who Halted Own Wedding with Bomb Threat Jailed

In fact, here's a great website that collects these kinds of headlines. If you're a writer and you're stuck for ideas, get to browsing. It's crazy what a true-life story might inspire in your own fiction!
Posted by Allie Boniface at 12:00 AM No comments:

Happy Monday! The Romance Reviews just released its October 2013 ezine, and Beacon of Love is featured on page 20. Check out this link for all kinds of great romance reads!

AND, for all writers, Lyrical Press just released this announcement:

Since Lyrical loves breaking rules, we're increasing the ‘traditional’ category word count to 50,000 - 80,000 words. This ensures every category book will have a simultaneous digital and print release.

Each category line will be a fully branded and unique Lyrical Press imprint.

We want danger, excitement. Shock us. I dare you.