Happy Friday, everyone! It's the official first day of summer - what a great day! Even better, it's my last day of teaching school for this year. Hubby and I will be going on vacation tomorrow to celebrate and start our vacation right :)

It's kind of neat to think about today as the longest day of the year and what the summer solstice has meant over the centuries to cultures who celebrate it. For example:

The ancient Egyptians built the Great Pyramids so that the sun, when viewed from the Sphinx, sets precisely between two of the pyramids on the summer solstice. 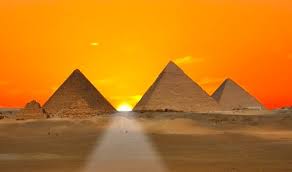 The Inca of South America celebrated the corresponding winter solstice with a ceremony called Inti Raymi, which included food offerings and sacrifices of animals, and maybe even people.

Recently, archaeologists discovered the remains of an astronomical observatory in a long-buried Maya city in Guatemala in which the buildings were designed to align with the sun during the solstices. During such times, the city's populace gathered at the observatory to watch as their king appeared to command the heavens.

And perhaps most famously, Stonehenge in the United Kingdom has been associated with the winter and summer solstices for about 5,000 years.

So...what are YOU doing with the longest day of your year?
Posted by Allie Boniface at 5:00 AM 1 comment:

Had to share this blog post with you all today. Writers especially will (should?) appreciate this, though it's worth reading no matter who you are, just to have a glimpse into a writer's world. Because it's, like, completely true. At least from my perspective. I told one of my writing friends the other day that I really needed to finish Inferno of Love because I was on the 5th draft and she said, "Oh, you have so much patience!" I don't know if it's patience or insanity, but I'll tell you what, author Libba Bray hits it squarely on the head here. Fair warning: it's long, so fill up your coffee and get comfortable!

Posted by Allie Boniface at 12:00 AM No comments:

Happy Monday, everyone! Just wanted to mention that I'll be at the Holiday in Homer (NY) Craft Fair on Saturday, July 20, all day, and would love to see you. I'll have copies of my re-release, The Promise of Paradise, as well as my older titles AND a few other goodies for you to choose from. So find my booth & stop by and say hi :)

I'll also be at the Indie Romance Convention in Lebanon, TN, October 4-5, chatting with other romance authors, selling and signing books, and generally trying to learn more about the ins, outs, pros, and cons of independent publishing through Amazon and other sites. Haven't decided yet whether I'll go that route again, but I figured it would be helpful to hear others' journeys.

So...if you live in or near either area, maybe we'll see each other in the next couple of months. Happy reading!
Posted by Allie Boniface at 12:00 AM No comments: