"Science, or para-science, tells us that geraniums bloom better if they are spoken to. But a kind word every now and then is really quite enough. Too much attention, like too much feeding, and weeding and hoeing, inhibits and embarrasses them." ~Victoria Glendinning

I have never been a gardener. I have never even pretended to be. I know some people love it, the planting and the tending and the reaping, and they all have lovely gardens that I envy whenever I drive by.

But I just cannot find the energy or motivation to join them, despite the promises of fresh air and exercise and meditation that comes with gardening. For one, any spare time I do have, I'd rather be reading or writing or running or walking - all of which I can also do outside. For two, gardening takes an awful lot of work, and vision, and patience, and I have discovered that I really don't have the hours or the creative ability to nurse plants and flowers over months at a time.

Having said that, I do try mightily each year to plant something new, to try again to coax flowers to grow. And I do love the moment they emerge from the ground in early spring. There is something so encouraging about green shoots poking up from bare earth, where there had only been snow for so long.

So I share with you my early spring pictures. And if anyone has suggestions for foolproof (and deer-resistant) plants and flowers that aren't too difficult to grow, I'm all ears. 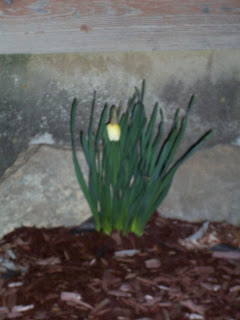 The very first daffodil to begin to show its face (it's in the premiere spot, in full sun right in front of the house) 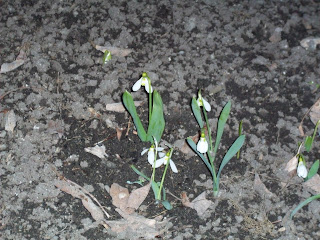 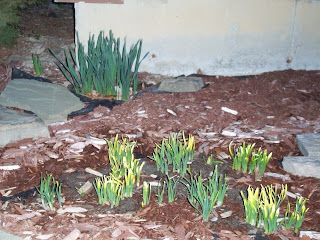 ...and an interesting occurrence: the daffodils in the back of this bed are, obviously, healthy and ready to bloom. The ones in the foreground, well, I laid all that black weed fabric in this bed last year and completely forgot I had early perennials there (we've only been in this house 2 springs). So not only were these guys fighting against the fabric, I had also laid a couple of fieldstones squarely over them. When I noticed a bump in the mulch a few weeks ago, I decided to investigate. Whoops. Poor things (I know uber-gardener Marianne will be angry with me...). But isn't it amazing that they continued to grow, despite all that? I'm waiting to see if they'll actually bloom.
Posted by Allie Boniface at 6:00 AM

Anyway, what I said was:

I don't use weed block, ever, because I want my plants to spread. I typically wait until everything has poked its head above ground, yank out the weeds and cover everything with six inches of mulch, LOL... Gardening back east is ten times as difficult as gardening out west.

I love to weed. I love to plant and see the results of my handiwork. I only have a few months out of the year to do so, and don't mind any of it. My brain can still think while I'm weeding. It's when I do my best brainstorming!

How I miss seeing my snowdrops(the first sign of life after a hard winter.) That's one of the disadvantages in being in sunny Fla. when spring finally arrives up north.
Daffodils are persistant, as is evidenced by yours pushing through fabric and rock!

I love seeing the first spring flowers bloom amid all of the blankness around them. My dad has some multicolored crocus blooming and my sister has hyacinths. If you want drought resistant plants, look up perennials for your growing zone. One of the best plant catalogs I have ever found is "White Flower Farm". I am sure they will send you one. Cindi
jchoppes[at]hotmail[dot]com

I have spent the day today weeding around our pond and put out a couple of elephant ear bulbs. I had to make hast while the sun was shineing we are going to rain for the next 5 days of so. What I have problems with is moles. They will work on your flowers too. I think they root up the bulbs.

Thanks for the suggestions, everyone. We'll see if I can roll up my sleeves and coax a few new things out of the ground this season!