Just in time for the holiday, here are 10 little-known facts about Thanksgiving (well, they were little-known to me, anyway). Hmm....think maybe there's a story idea in here somewhere?

#2. Californians are the largest consumers of turkey in the United States.

#3. The heaviest turkey ever raised was 86 pounds, about the size of a large dog.

#4. The Macy's Thanksgiving Day Parade used to use live animals instead of floats (they borrowed the animals from the Central Park Zoo).

#5. The night before Thanksgiving is the single biggest day for bar sales in the United States.

#6. According to Guinness World Records, the largest pumpkin pie ever baked was 12 feet in diameter and 2,020 pounds. The recipe required 900 pounds of pumpkin, 1,860 eggs, 300 pounds of sugar and 250 pounds of crust!
#7. While commercially raised turkeys usually can't fly, the wild variety can hit speeds of up to 55 mph when outrunning a predator.

#8. Part of the reason that Swanson started creating T.V. Dinners in 1953 was because they needed to find something to do with 260 tons of frozen turkeys that were left over from Thanksgiving.

#9. The original cornucopia was made from a curved goat's horn. 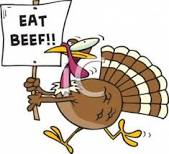